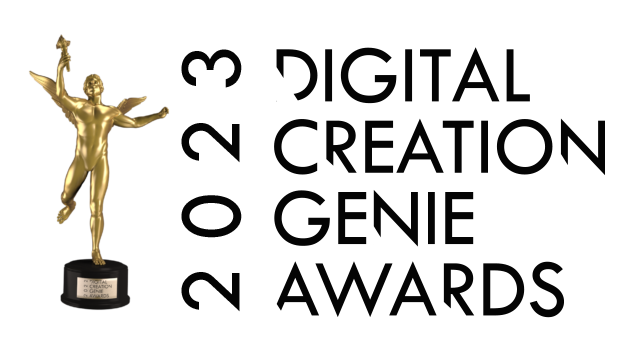 The PIDS Enghien is an event dedicated to digital creation in all its forms: from visual effects to virtual reality, through animation and 3D, the PIDS crosses the creative, technical, economic and creative challenges of a sector in perpetual evolution.

On the occasion of the PIDS ENGHIEN (January 25th to 28th 2023), the Centre des arts and the city of Enghien-les-Bains are pleased to announce that MrDoug Chiang, Lucasfilm Vice President and Executive Creative Director, will be awarded by the GENIE Visionary Award on the 25th of January 2023 during the ninth edition of the Digital Creation GENIE Awards and will give a master class on January 27th, 2023. 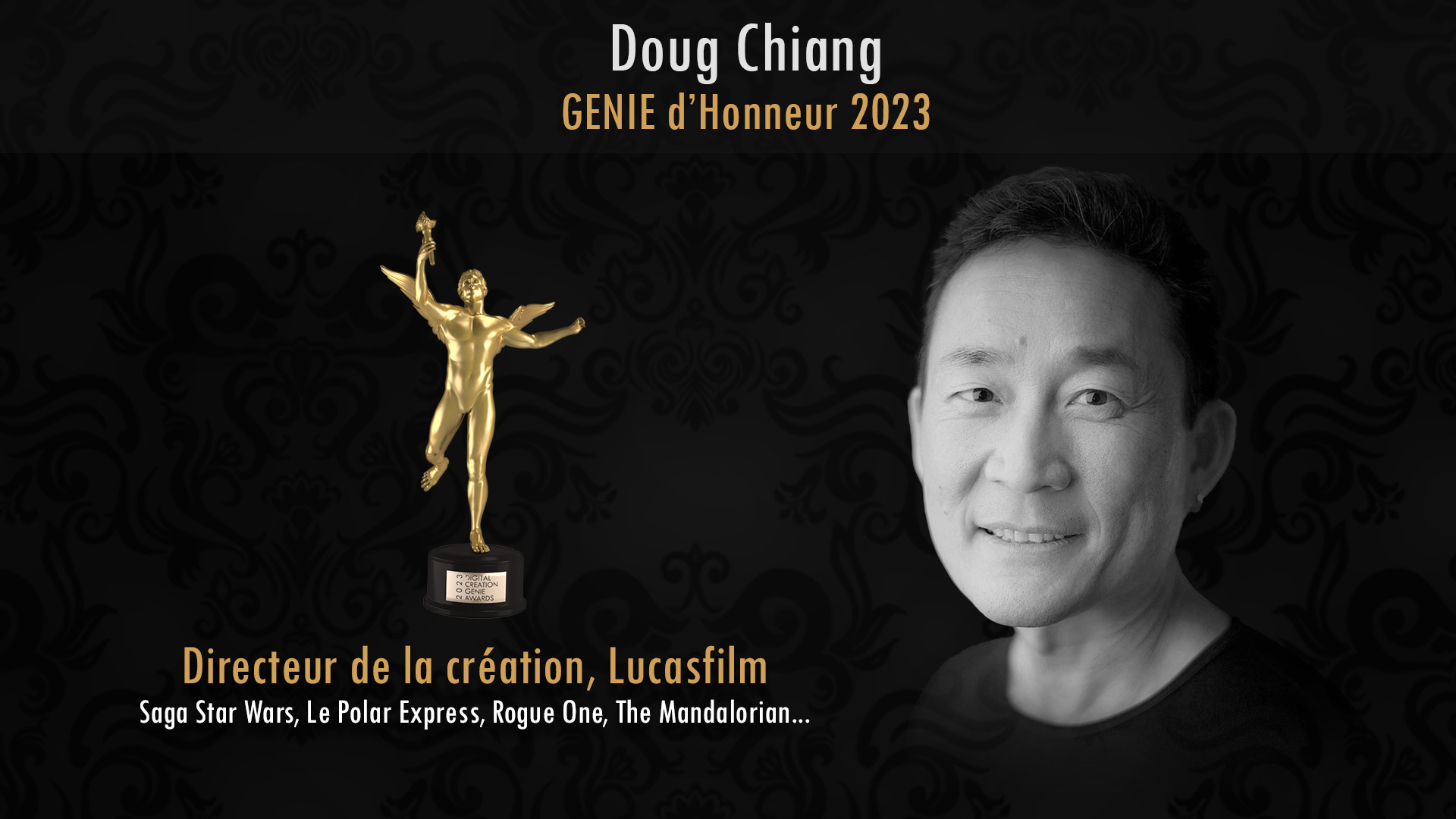 Doug Chiang, the Academy Award-winning artist, author, and production designer, began his career as a stop motion animator on the TV series Pee Wee’s Playhouse. After attending UCLA Film School, he worked as a commercial TV Director for Rhythm and Hues before becoming Creative Director for George Lucas’ Industrial Light and Magic in 1991. Chiang has earned numerous awards including an Academy Award, two British Academy Awards, two Clio Awards, a Theo Award, a VES Award, a Webby, and an Art Directors Guild Award. He was nominated for an Emmy for The Mandalorian.

In 1995, George Lucas selected Chiang to serve as Head of the Lucasfilm art department for the Star Wars prequel films. Chiang left Lucasfilm in 2002 to form IceBlink Studios, his 35-person design studio.

In 2006, Chiang partnered with the Walt Disney Company and Robert Zemeckis to form ImageMovers Digital, a new digital film studio built around IceBlink Studios. As Executive Vice President, Chiang grew the company to a core staff of more than 550 employees and oversaw its daily operations until 2011. Additionally, he served as Robert Zemeckis’ Production Designer for ten years on films such as The Polar Express, Beowulf, and Disney’s A Christmas Carol.

Chiang returned to Lucasfilm in 2013 and currently serves as Lucasfilm’s Vice President and Executive Creative Director. With over 25 years of Star Wars design expertise, he oversees designs for the Star Wars franchise including films, theme parks, games, and new media. He was Lucasfilm’s principal designer for Disney World Resort’s Star Wars: Galaxy’s Edge and Star Wars: Galactic Starcruiser. He served as Production Designer on Rogue One: A Star Wars Story and most recently reunited with Zemeckis on Disney’s Pinocchio. Currently, Chiang also serves as Production Designer for the Star Wars live-action series, The Mandalorian, Obi-Wan Kenobi, Ahsoka, and Skeleton Crew.

As an author he has also written many books including Robota, his acclaimed illustrated novel that he created and co-wrote with Nebula and Hugo-winning author Orson Scott Card.

The GENIE Visionary Award rewards a personality of the digital creation industry for significant and lasting contributions to the art and science by way of vision, artistry, invention and innovation.

After a career in Television for Paramount Pictures, Rob Legato joined the newly formed Digital Domain, a visual effects company founded by James Cameron, Stan Winston and Scott Ross. For Rob’s first feature assignment, he became the Visual Effects Supervisor, 2nd Unit Director and VFX Director of Photography for Neil Jordan’s “Interview with the Vampire.” This first feature led to Ron Howard’s “Apollo 13″ with Legato serving as the film’s Visual Effects Supervisor and Director of Photography for the VFX unit. Mr. Legato earned his first Academy Award nomination and won the British Academy Award’s BAFTA for his effects work in “Apollo 13.”

His next feature assignment, James Cameron’s “Titanic,” spanned the next several years and proved ultimately to be one of the most successful films ever made. For this film, Mr. Legato won his first Academy Award®. A few years later, he will find James Cameron on “Avatar” where he created and conceived the Virtual Cinematography Pipeline.

Legato left Digital Domain to join Sony Pictures Imageworks where he served as Visual Effects Supervisor on two Robert Zemeckisfilms, “What Lies Beneath” and “Cast Away.” 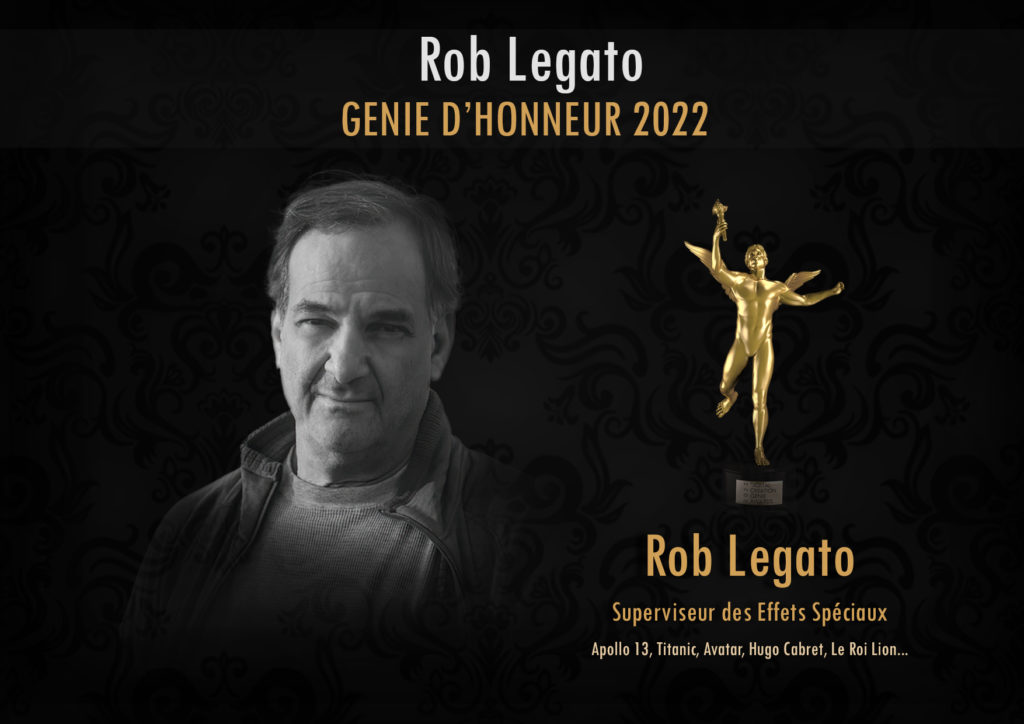 Rob Legato is known for his numerous collaborations with Martin Scorsese(6 films) with who he won the Oscar® for best Visual Effects on “Hugo Cabret”.

He is currently serving as Visual Effects Supervisor and 2nd unit director on Antoine Fuqua’s “Emancipation” for Apple Studios.

A GENIE VISIONNARY AWARDS for Ex-Machina 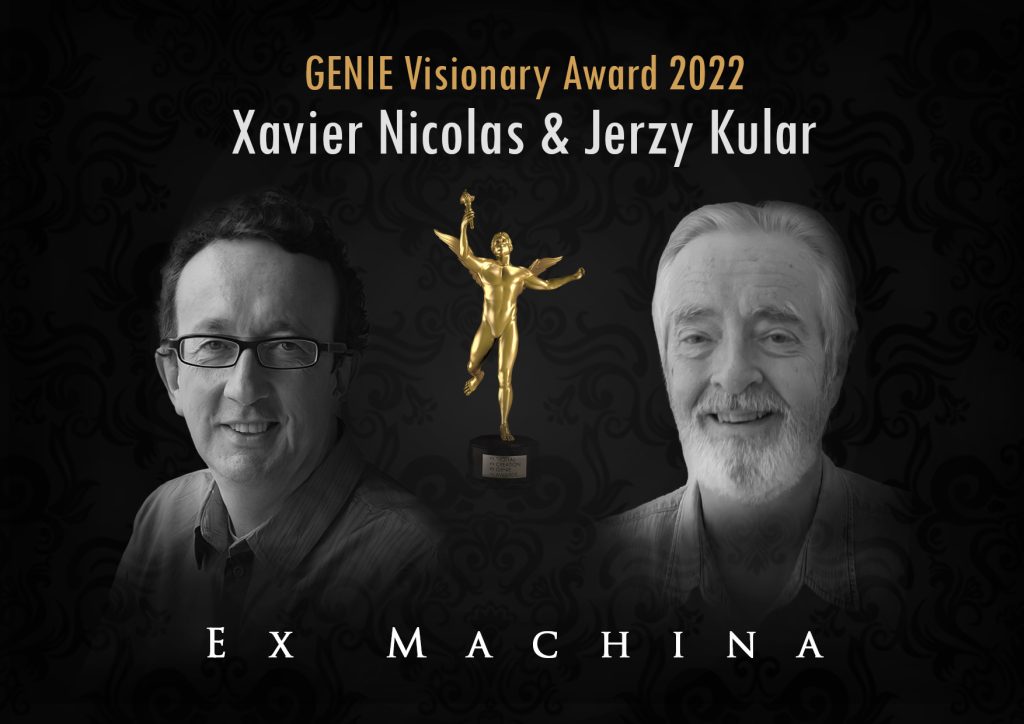 Architect of the computer animation team of SOGITEC Audio-Visual,Xavier Nicolas co-founded Ex-Machina and developed it internationally with branches in Los Angeles and Tokyo. In 2007, Xavier Nicolas joined the George Lucas studios as General Manager in order to contribute to the development of the Lucasfilm Singapore studio into a set of more than 500 artists and technicians dedicated to special effects (ILM Singapore), games (LucasArts Singapore ) and the animated series for Star-Wars (Clone-Wars). Following the acquisition of Lucasfilm by Disney, Xavier took over the management of THX in San Francisco.

With the creation of Ex-Machina Jerzy Kular has largely participated in the dissemination of the “French Touch” around the world, first in Europe, then in America, Asia and the Middle East.

He has worked in all audiovisual fields, but is best known for his innovative work as a director of films for exhibitions and attractions for theme parks, in 3D relief, and in dynamic cinema.

He has received numerous international awards for his work, often in collaboration with Jean-François Henry.

In 2008 he set up and managed a subsidiary of the Supinfocom / Rubika school in India, before taking the head of the mother school in Valenciennes in 2011.

Today, Ex-Machina is no longer but it has spawned more than 200 employees who then worked all over the world. Some have founded studios, schools, others have taken key positions in major international studios … It is therefore to this memory and this heritage that PIDS ENGHIEN and its editorial committee have chosen to award this year a GENIE of honor to Ex-Machina.